Do Atheists Make the World a Better Place?

Posted by angelapagano in Uncategorized on 13 June 2011

Why aren’t more atheists in significant leadership positions in this world? Would it matter if there were? Only if they are interested in real solutions.

Cool, potential. But 1959 — have atheists really been working for Heaven on Earth all this time? How have they went about doing this? What the hell happened?

Let’s look at a few things atheists are focusing on: defending civil rights for nonbelievers; the total separation of church and state; addressing issues of the First Amendment public policy; church/state violations; bringing about change through activism to benefit the secular community. Within this, all Life is not considered, real solutions for this world are not being considered. Look at how many in this world have NO rights at the moment. Leaving the current system in place, and merely tweaking points within it, is absolutely unacceptable and is in no way an option. Church/state violations — what about all of the violations against LIFE? What about doing that which benefits ALL LIFE? What about bringing about REAL change, within and without? A completely new system that is Best For All Life, the Equal Money System, wherein all have equal rights, violations against Life cease to exist, all Life is actually benefited; that is a real solution — all Life is considered, as one, as equal. Wouldn’t feel the need to separate anything then; besides, religion will end with Equal Money.

Look at what actually becomes possible within such a system. Look at, for instance, how poverty immediately ends, war ends, how science will change. See, paragraph 2 (the above quote) becomes a reality; real ‘loving thy neighbor as thyself’, real ‘Heaven on Earth’.

Whether religious or atheist, or anything else, look: You are HUMAN; accordingly, you require to sort yourself out, to re-educate yourself, and to change yourself as who you are into a human being that is Best For All. The same points, for instance, that were jotted down in my previous post with regards to what the belief in an afterlife-Heaven reveals about humanity — abdication of self-responsibility, self-interest, acceptance and allowance of abuse, and so on — it applies here as well, with atheists. It is a human problem — and the human is the problem. Look at what exists here as a result of humanity. Yet, as humanity — as who did it, who allowed it, accepted it, who did nothing to stop it, as the root of the problems in this world — we stop, we stand up, we correct ourselves, and we actually change ourselves in a way where we become the actual living solution.

We become the human that this world actually requires and deserves — self-responsible, self-honest, a human that takes action, always, that actually cares, a human that is fearless and relentless in establishing that which is Best For ALL Life as ourselves and this world, a human that is unstoppable and immovable in this task, incorruptible, uncompromising, a human who has taken on their potential of abuse, who has taken on their ego and can work with anyone and anything, who always does what is Best For All Life in all ways as it has actually become who they are, with absolute self-discipline, dedication, self-stability that remains constant even in an increasingly unstable world, and solid self-trust where one can actually trust themselves and be trusted to always do what is Best For All Life, no matter what. A real leader. This world requires real leaders — as many as possible — who stand as a living example for humanity while each one wills themselves to stand up and become a real leader themselves, as equals, equally taking self-responsibility for themselves and this world.

Atheism is referred to as a “life stance”. Take a real life stance — stand up for LIFE. Join the Equal Money & Equal Life direction, where we’ll enter the political arena as real leaders, making a world where ALL LIFE is equally honored and supported, ensuring ALL live a dignified life from birth to death and that the Earth is actually cared for. We will not fail to make the world a better place.

Time to stand up for Life. If you’re unwilling to do so: don’t claim to have the answers, you should keep your opinions to yourself; the knowledge you may have is rendered useless through your inaction, refusal to take self-responsibility for what exists here, and failure to consider all Life.

“Use your 1 vote. Participate. Change the destiny of the world. That is why we are here — join us. We won’t stop, and we will stand by that which is proven mathematically, scientifically to be the Best For All — unquestioningly. Therefore, supporting us is supporting you. Let’s walk and get this done.” (from Oneness in Politics) 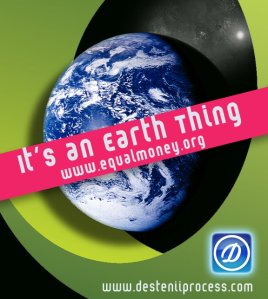 Recession Leads to Increase of Baby Abuse – What’s the Solution?

Posted by angelapagano in Uncategorized on 7 May 2011

A recent study found that the amount of deliberate head injuries to babies DOUBLED during the recent recession. Database research showed a 101% increase. There was also a notable rise in more extensive injuries, causing a rise in deaths and severe brain injuries. (Study conducted by researchers at University Hospitals Rainbow Babies and Children’s Hospital in Cleveland.) Previous research conducted by the University of Pittsburgh gave similar findings; deliberate head trauma increased substantially after the recession began.

Our current money system is abusive, and it specifically encourages–in various ways–the already-abusive human to become increasingly more abusive. The study-finding shows merely 1 example of this. (Abuse is an incredibly vast aspect of humanity, and as a result, this world; and I am merely using this study-finding that touches on 1 example as a reference point for this writing.)

The human–you and I–caused the current abusive system of this world that disregards Life. The current system did not just magically, spontaneously come to be. The human made it possible, and the human made it manifest in this world; and it took time, it took effort, it took great motivation and drive fueled by self-interest and desire to abuse.

An absolute change is required, within and without — as something done only halfway does not stand the test of time, and simply cannot be trusted. The human has to change for the world to truly change.

If humanity does not change, the potential of abuse remains. The potential–no matter how minuscule–to abuse within each human must cease to exist, establishing a human that can actually be trusted with Life. By doing this with ourselves, for ourselves, we in that way ensure that it will not exist within this world. In other words, by changing ourselves, we ensure that the change that we bring to the world is real and stands the test of time.

The human is the root of the problems in this world — but we can be the actual living solution.

Just as the human caused the current system, the human–YOU AND I–take self-responsibility and do what is required to bring about a world where Life is never again disregarded, but supported, cared for and honored as ourselves in every way, eternally.

Let’s take the aforementioned study-finding for example; humans deliberately inflicting head trauma on to babies twice as much as usual during the recession. There’s 2 points I’m looking at within this: the human experience within the recession–in other words, the current money system–triggers an increase of usual abusive activity; and that the human participates within such abuse as a “usual”. Within an EMS, each would have ample money; and thus, it would be the end of the experience of money-related stress or financial strain. The EMS would significantly eliminate abuse and self-destructiveness by itself. Within DIP, the self-destructive / -abusive nature that exists within humanity as the potential of such acts is taken on.

(Additionally, the articles I read suggested the following points: parents or caregivers of a child may have been “stressed to the breaking-point” as a result of economic problems such as foreclosures and unemployment; parents or caregivers of a child, through suddenly becoming homeless, may have been forced to place their child around relatives or others who would do such things; support-services for children and families have been cut down. None of these points would exist in an EMS.)

In an EMS, there would not be such a thing as “lacking money”. No recession. It would be the end of poverty. EVERYONE in this world would actually be living like MILLIONAIRES in an EMS. The EMS is a completely new system; and what it makes possible in this world goes beyond anything humanity’s ever seen or lived.

The EMS will be established in this world in the next 10-20 years. While the EMS is on its way, DIP gives the opportunity to build quite a sufficient income for yourself; and thus, directly giving the opportunity to assist and support yourself in all ways while you participate in the courses and assist with bringing real change to this world through changing yourself.

We are able to change our nature, we are able to change what we have become. Within DIP, you take this on in an effective step-by-step, breath-by-breath practical way. It takes self-discipline and self-dedication to get this done, and DIP supports and assists you to develop that, among other points, within yourself — to a degree that you may have never considered possible.

Let’s change ourselves as humanity in a way that stands the test of time and make a New World possible where ALL live a dignified life, from birth to death — where abuse ceases to exist and would not even be part of our vocabulary, because we as humanity no longer live that word and stand absolute in never again accepting and allowing abuse to exist within ourselves, and thus our world.

I am 1 vote for Equal Money, and a world where the principle of What is Best For ALL Life is what each and every human lives and breathes, a world where abuse in any form can no longer exist — are you?

We’ve turned this place into Hell — but we’re able to turn it into Heaven.

Show your support and participate in Desteni I Process.